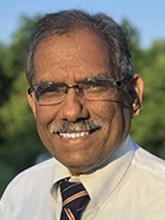 Dr. Sudhir Srivastava currently serves as the Chief of the Cancer Biomarkers Research Group in the NCI Division of Cancer Prevention, a position he has held since 2000. His efforts focus on the molecular biology of malignancies, early malignancies, risk assessment, informatics, and providing leadership in the areas of molecular screening and early detection. He initiated new areas of research, such as molecular signatures of infectious agents in cancer, micro-imaging in classifying preneoplastic lesions, nano-technology in earlier cancer detection, and metabolomics and glycomics alliances with other NIH institutes. Sudhir has a Ph.D. in biological science, an M.S. in computer science, and an M.P.H., all from the Johns Hopkins University. He is one of the principal authors of the Bethesda Guidelines for diagnosing hereditary non-polyposis colorectal cancer, and a principal architect of NCI's Early Detection Research Network (EDRN). Among his several national and international honors and awards from NIH, NCI and others, in 1995 he was elected to the American Joint Committee on Cancer (AJCC), which is responsible for developing staging criteria for cancers for worldwide use, and serves on the Executive Committee; he was the first Asian American and non-MD to do so. During his term, AJCC accepted the inclusion of tumor markers in the staging guidelines for colorectal cancer.

As a member of numerous scientific committees, Sudhir initiated and chaired national and international state-of-the-science workshops and conferences, and was principal architect of the first Gordon Research Conference on New Frontiers in Cancer Detection and Diagnosis. He has published more than 180 peer-reviewed papers and edited four books. He was editor-in-chief for the journal Disease Markers for more than a decade; led creation of the journal Cancer Biomarkers; was appointed to the editorial board of the journal Cancer Prevention Research; was a founding member of the Human Proteome Organization; and served as founding editor and board member for the Journal of Proteomics & Bioinformatics.

In August 2003, Sudhir was featured in Wired magazine for his leadership in creating the Early Detection Research Network (EDRN) at NCI, and has been invited by many international funding agencies in China, Japan, and European Union to set up an EDRN-like program in those parts of the world.