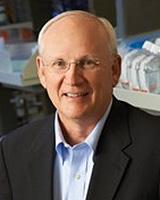 Raymond N. DuBois, M.D., Ph.D., was named Dean of the College of Medicine at the Medical University of South Carolina (MUSC) in March 2016 and is recognized for his studies aimed at a deeper understanding of the connection between inflammation and cancer. He and his laboratory examine the molecular mechanisms by which inflammation and inflammatory mediators affect tumor development and serve as targets for cancer prevention. His research has revealed that prostaglandins (PGE2) in the tumor microenvironment increase immune tolerance and resistance to therapy. His findings have been seminal and helped explain, to a significant extent, the underlying mechanisms that govern the risk of colorectal cancer which are responsible for the cancer protective effects of aspirin and other NSAID drugs which are known to reduce colon cancer risk in thousands of people, especially those with certain hereditary colon cancer syndromes. He has further delineated the intricate connections between inflammatory mediators downstream of PGE2 (CXCL1,2,5; CXCR2) and modulation of immune cells ( MDSCs) in the tumor microenvironment that help block immune attack of tumor cells.

Prior to his appointment as Dean, Dr. DuBois served as the Executive Director of the Biodesign Institute at Arizona State University and held a joint appointment as Professor of Medicine in the Mayo College of Medicine. Before then (2007-2012), he served as the Provost and Executive Vice President at The University of Texas MD Anderson Cancer Center in Houston, directed Vanderbilt’s Division of Gastroenterology, Hepatology and Nutrition, and served as Director of the Vanderbilt-Ingram Cancer Center. Dr. DuBois is a Fellow of the American Association for the Advancement of Science and the American Association for Cancer Research (AACR) Academy, Past President of the AACR, the Southern Society for Clinical Investigation, and the International Society for Gastrointestinal Cancer. He was also inducted as a member of the American Clinical and Climatological Association, the Royal College of Physicians in London, the Association of American Physicians and the American Society for Clinical Investigation. He also currently serves on the AACR Academy leadership council.

During his career as a physician-scientist, DuBois has published over 200 peer reviewed research articles, more than 60 review articles, 25 book chapters, and three books. His work has been cited over 57,000 times as of the 2019 Google Scholar database. He is a co-inventor of a method to identify and prevent cellular genes needed for viral growth and cellular genes that function as tumor suppressors in mammals. His research has been continuously funded from the NIH and other agencies/foundations for the past 25 years. DuBois earned a bachelor’s degree in Biochemistry (Honors) from Texas A&M University and a doctoral degree in Biochemistry from The University of Texas Southwestern Medical Center in Dallas. He obtained a medical degree from The University of Texas School of Medicine in San Antonio, followed by an Osler Medicine internship and residency, and a gastroenterology fellowship at the Johns Hopkins Hospital in Baltimore.