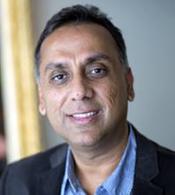 Dr. Chatterjee is known for foundational and methodological contributions to multiple areas of modern biomedical data science, including large scale analysis of genetic associations, gene-environment interactions, polygenic risk scores and predictive model building by synthesis of information from multiple data sources. His collaborative research has provided insight into genetic architecture of risks, role of gene-environment interactions and utility of polygenic risk scores across a broad spectrum of cancers.

He is currently a member of Scientific Advisory Committee of the Radiation Effect Research Foundation (Hiroshima, Japan) and the Prevention and Population Committee of the Cancer Research UK. Dr. Chatterjee is a Fellow of the American Statistical Association and has received numerous prestigious national and international awards, including the Mortimer Spiegelman Award (2010) from the American Public Health Association, both the President’s Award (2011) and the Snedecor award (2011) from the Committee of Presidents of Statistical Society (COPSS), Myrto Lefkopoulou Distinguished Lectureship (2013) from the Harvard School of Public Health and Norman Breslow Distinguished Lectureship (2017) from the Department of Biostatistics, University of Washington, Seattle.