Interpreter of Maladies - AI for Addressing Problems in Precision Oncology 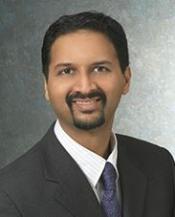 Anant Madabhushi, Ph.D., is the Donnell Institute Professor of biomedical engineering at Case Western Reserve University (CWRU) in Cleveland and director of the university’s Center for Computational Imaging and Personalized Diagnostics (CCIPD). He is also a Research Scientist at the Louis Stokes Cleveland Veterans Administration (VA) Medical Center and has affiliate appointments both at University Hospitals and Cleveland Clinic. He holds secondary appointments in the departments of Biomedical Engineering, Urology, Radiology, Pathology, Radiation Oncology, Electrical Engineering & Computer Science and Gen Med Sciences at CWRU.

Madabhushi’s team at CCIPD is developing and applying novel Artificial Intelligence and machine learning approaches for the diagnosis, prognosis and prediction of therapy response for a variety of diseases including several different types of cancers, cardiovascular disease, kidney and eye disease. The Center is located in Cleveland’s unique medical ecosystem, an extensive clinical network within which it boasts numerous successful collaborations including with the Cleveland Clinic and the Cole Eye Institute, University Hospitals, the VA Louis Stokes Medical Center, MetroHealth, and the Case Comprehensive Cancer Center at CWRU.

Madabhushi has more than 100 patents either issued or pending in the areas of medical image analysis, computer-aided diagnosis, and computer vision, more than 70 of which are issued. He was responsible for more than 10 percent of all patents awarded to Case Western Reserve University in 2017, 2018 and 2019.

The author of more than 400 peer-reviewed journal articles and conference papers, Madabhushi is a sought after lecturer who has delivered more than 350 talks around the world. His efforts as a professor and researcher have gained international attention in the field of biomedical engineering, garnering him several awards. Most notably, Madabhushi is a fellow of the American Institute of Medical and Biomedical Engineering (AIMBE), a Fellow of the Institute of Electrical and Electronics Engineers (IEEE) and a fellow of the National Academy of Inventors (NAI). In 2015, he made Crain’s Cleveland Business magazine’s “Forty under 40” list. In 2019 and 2020, Madabhushi was named to The Pathologist's Power List, a list of 100 most inspiring professionals in pathology and laboratory medicine. In 2020, he received the Diekhoff Award for Distinguished Graduate Student Mentoring at CWRU. In 2021 he was honored as one of Crain’s Cleveland Business Notable Entrepreneurs of the year.

Madabhushi’s work on developing “smart computers for identifying lung cancer patients who will benefit from chemotherapy” was ranked as one of the top 10 medical breakthroughs of 2018 by Prevention Magazine. In 2019, Nature Magazine called him out as one of five scientists pursuing truly offbeat and innovative approaches in cancer research. His work on using AI for addressing health disparities, especially in identifying differences in appearance of prostate cancer between black and white men, received national attention in 2020.

Madabhushi has secured more than $60 million in grant funding and co-founded two companies, Vascuvis Inc. (now Elucid Bioimaging) and IbRiS Inc., which was acquired by Inspirata in 2015. He has been involved in several sponsored research and industry partnerships with medical imaging and pharmaceutical companies. In addition, more than 15 technologies developed by Madabhushi’s team have been licensed.